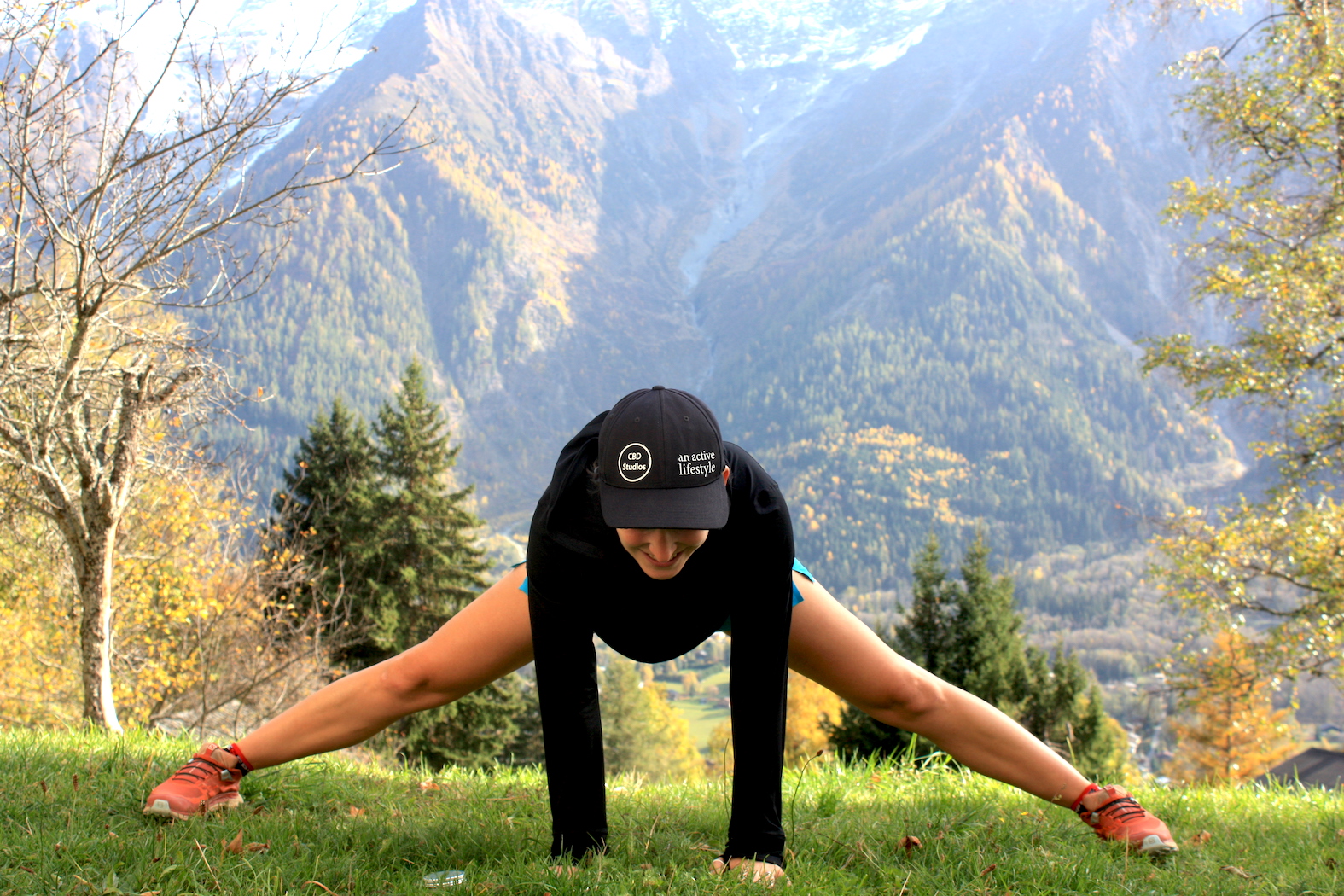 Everywhere we look sources are proclaiming CBD to be a natural alternative to ibuprofen, an antidote to anxiety, a sleep aid, a post-workout recovery aid. I am going to talk more specifically about the use of CBD for athletes.

Sports men and women put their bodies through a lot of pressure, resulting in both positive and negative effects, therefore many athletes are already using CBD as an indispensable part of their regime. Endorsed by a number of leading and influential sports people, I thought CBD definitely worth investigating and trialling myself. Could CBD not only improve my running performance but also reduce the effects of old injuries? Could it help relieve sore muscles, and delayed onset muscle soreness? But first of all…

Some of the reviews and testimonials have been really interesting. One of my training partners Caroline Ford, of Chamonix Mt Blanc, France, has seen significant results. A keen hiker and cross-country runner, Caroline has been using CBD oil and balm on her ACL after exhausting all other treatments. “After about a week of rubbing it on my knee, 4/5 time a day, I already saw a huge reduction in inflammatory pain. I then reduced it to morning and night. When I am working out I rub it on before and wrap it in a sleeve to keep it warm to make sure it all soaks in. What we know is that it is not curing or fixing the injury, but it is reducing the inflammation almost immediately, rapidly reducing or stopping the pain. Other than this, the great thing is that CBD is completely harmless. It is important to buy it from a good reputable company so you know that is from high-end production facilities. Like many athletes I’ve spoken with, we appreciate that CBD is a natural product. We don’t like to take ibuprofen, opiates or prescription medications. The side effects are too negative and they are addictive.”

Andrew Talansky, a professional triathlete and elite cyclist from Napa, California, who rode in the Tour de France; “I don’t like to take stuff like ibuprofen or prescription medications. I took it (CBD) for a couple of weeks and there was a noticeable difference immediately. And it wasn’t just that my hip was feeling better, I was less anxious and I was sleeping better. I’m always looking for natural alternatives.” When Talansky heard an increasing number of athletes talking about CBD he, “went from scepticism to being interested to asking advice on how to use it,” he says. Now he encourages other athletes to try CBD, in part “to get rid of the association with smoking weed,” he says, “it’s completely different.”

CBD: How it Actually Works

Athletes can legally consume cannabidiol, but what is it and what does it actually do?

To begin with, cannabinoids already exist in your body. We have an endocannabinoid system (ECS) that modulates the activity of neurons. The cannabinoids found in the body are the same as those found in the cannabis plant. Scientific research on how the ECS works and how CBD influences it is still evolving.

Researchers believe that CBD interacts with receptors in your brain and immune system. Receptors are tiny proteins attached to your cells that receive chemical signals from different stimuli and help your cells respond. This creates anti-inflammatory and painkilling effects that help with pain management.

So, it is becoming more apparent that taking CBD as a supplement increases the activity of your body’s existing endocannabinoid system.

This is actually what is called homeostasis, a term used to describe the process of maintaining internal balance in an ever-changing external environment. In humans, homeostasis refers to a multitude of processes that ultimately keep our bodies functioning properly.

As an athlete you apply greater stress to your body than your endocannabinoid is designed to manage. Adding exogenous CBD supplements seems to help this system and the activity of neurotransmitters for athletes to maintain homeostasis.

After researching athletes and other sporty types I decided to trial CBD for myself whilst training for a 20km high altitude trail running race. Not a huge distance but I wanted to push myself and experiment with how CBD would affect my performance and recovery, so I started to use the recovery balm on my shoulders and knees.

I immediately noticed that my sleep improved straight away; I slept soundly, woke up less during the night, and felt fresh in the mornings. This obviously made me far more eager to train and gave me more energy for my training sessions. then noticed that I was training with more vigour and pleasure.

The most apparent difference though was that the pain from my long-term shoulder injury was subsiding. The dull ache, pins and needles, or sometimes-agonising numbness had finally ceased. This pain is usually present all the time, even when just sitting at a desk, so to feel that it was really easing off was a significant effect.

On a more personal note, I’ve also noticed that since using CBD I feel much calmer. I have two small children so am no stranger to the pressures of juggling family, work, sport, and life in general. For this busy athletic mum, CBD combined with stretching, massage and yoga has been a game-changer both physically and emotionally.